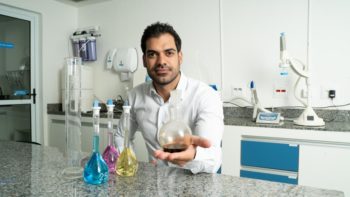 CANNABIS CULTURE – The cannabis industry in Brazil took a giant leap forward on April 7th when the country’s health regulatory agency (Agência Nacional de Vigilância Sanitária: ANVISA) gave a Good Manufacturing Practices – Pharma Grade (GMP) to the Brazilian branch of the multinational Ease Labs pharmaceutical group.
Ease Labs becomes the first cannabis company allowed to locally produce CBD products in the major South American market, as the certificate allows Ease Labs to develop, manufacture, store,  import and export cannabis-based products in Brazil, making it a pioneer in this sector.
About Ease Labs
Ease Labs products are currently made in the United States and Europe, and they are subsequently distributed to its Brazilian clients by Ease Labs International, a Uruguayan branch of the group. Because Ease Labs’ products are made abroad the products come at a higher cost to patients.
Gustavo Palhares Ease Labs

In an interview with the author, Ease Labs CEO Gustavo de Lima Palhares explained that ANVISA’s authorization to produce cannabis products in Brazil is a victory for the entire Brazilian cannabis market, adding that easier, more affordable access for patients will happen sooner rather than later.
“Being certified is a huge milestone for our business that takes us closer to making the medical cannabis market a reality in Brazil. The products will be produced here in Brazil, so prices will be considerably lower for patients who previously had to import products priced in dollars and become available in pharmacies across the country,”  explained Mr. Palhares to the author.
Where will Cannabis Products be produced in Brazil?
Located in the capital of Minas Gerais, Easelabs’ 1,950 m² pharmaceutical plant has the capacity to supply demand across Brazil, in addition to two laboratories, one for quality control and another for R&D.
For about 35 years, the site was used by a local company to produce herbal medicines, but throughout 2020, a series of improvements and expansions took place in the plant to exceed sanitary standards. For example, “more than 300 internal procedures were reviewed and created to ensure safety and quality during production and testing, which now have full pharma grade certifications, so we are ready to start operating,” noted the Ease Labs’ CEO.
Apart from the aforementioned products, the company’s portfolio will eventually also feature other herbal medicines developed from plants found in Amazonia and the Cerrado savanna region of Minas Gerais (a state in southeastern Brazil), as well as pharmaceutical-quality food supplements.
Following certification under ANVISA’s rules for Good Manufacturing Practices, the next step is for Ease Labs to import cannabis API for final preparation. “All of our suppliers go through meticulous technical and regulatory qualification to ensure that imported products comply with our quality prerequisites and parameters for Good Manufacturing Practices,” says the CEO.
Looking to the future, Mr Palhares’ team in Belo Horizonte already has strategies in place to lower the costs of supplies and produce products more efficiently, while aligning the entire supply chain with the company’s partners.
In other words, the consequences of ANVISA’S certification cannot be minimized, as they will allow Ease Labs to potentially corner the Brazilian market for the near future.
The Future of Cannabis in the Americas
The legalization of marijuana and cannabis is a sensitive issue in Latin America, as it is often associated with transnational criminal organizations, and the wider war on drugs like cocaine.
Nevertheless, the times are changing, and there is a growing trend to legalize marijuana and CBD. Marijuana for medical uses is allowed in several countries, such as Argentina, Chile, Ecuador and Peru. The Mexican congress is similarly debating  a law to legalize it for medical uses. Meanwhile, Uruguay became the first country to legalize marijuana for recreational purposes. . The growing legalization of cannabis in Latin America is somewhat on par to the situation across the world, where the cannabis industry is an increasingly profitable field – global cannabis revenues are now expected to surpass USD42 billion by 2024, with at least some USD9.1 billion (according to 2019 estimates) coming from Latin America.
As for the United States,  according to the results by a recent poll released on 16 April by the Pew Research Center, “an overwhelming share of U.S. adults (91%) say either that marijuana should be legal for medical and recreational use (60%) or that it should be legal for medical use only (31%). Fewer than one-in-ten (8%) say marijuana should not be legal for use by adults.” In New York state alone, the legalization of cannabis could create as many as 60 thousand new jobs and “generate up to $3.5 billion a year in economic activity for the state.” These numbers could increase even more if, or rather when, the country legalizes cannabis at a federal level.
Conclusions
Obtaining the coveted ANVISA certification will make Ease Labs a standout both in the Brazilian and global cannabis market. By making its products in Brazil, the prices of the company’s products will be competitive with those of leading cannabis companies internationally and will become more accessible to Brazilian patients. It is quite praiseworthy that the company got certified to operate in the Brazilian market, a nation known for enormous regulatory barriers, which means that Ease Labs has now access to a largely untouched market.
As for the future of Ease Labs, Mr. Palhares teased that negotiations to export  products from Brazil to other countries are already underway, and the company is preparing clinical trials since their ambitious plans include registering all their cannabis products as medications in many different jurisdictions.

Wilder Alejandro Sanchez is a Washington DC-based analyst that covers geopolitical, trade and defense issues in the Western Hemisphere and the post-Soviet world. The opinions expressed in this article belong solely to the author. Follow him on Twitter: @W_Alex_Sanchez