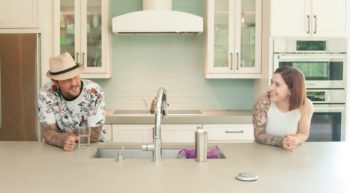 CANNABIS CULTURE –When I got kicked out of High School, I never expected to become a stripper, marry a drug dealer, and then become a successful CEO.

I got a DUI right before graduating high school and found myself getting into more trouble. I started dancing at strip club out of town to pay for my lawyer bills and a bad weed habit. Looking back, the entire experience truly taught me customer service, upsell, and how to keep a repeat customer. Things got even more interesting one night when this super hot tattooed guy came in with his friends. I know it sounds cheesy, but it felt like love at first sight. A few drinks later I ended up telling him my real name,  and he asked me out. As content as I was being single and independent, I couldn’t stop thinking about him.

He picked me up on his motorcycle and we went on our first date. This turned into a more frequent thing and we were starting to like each other, even though neither of us would admit it. He always respected my boundaries, occupation, and never asked too many questions- so I didn’t either. We slowly built a lot of trust in each other, and he told me after a year what he did for a living wasn’t legal, but never gave me any details. This kinda turned me on and who was I to judge him? Certain things should be legal anyways. We ended up moving in together so I retired from dancing and things started to get serious. He came home one day a new MacBook Pro for me and I started webcam modeling with it. I was making better money than I did at the strip club and was even selling my used socks online. I realized how easy it was to ship things from home so I started selling all the clothes I didn’t wear on eBay, Poshmark, and Etsy. Oddly enough, I started making more money selling things online than I did webcam modeling. So I decided to start my own online store with my own domain. My first business. Fast forward a few years and we were rolling in more cash together. Between his product and my product, we were outgrowing our space. Our one-car garage became my studio, so our G-wagon and Mercedes were always parked in front of our condo. No wonder our neighbors were growing suspicious as to what we did for a living. I started earning nearly $1000 a day with my online business and he encouraged me to keep going. We were having the fucking time of our lives and life was good. Little did we think about it, but having more money came with more problems. January of 2017 the cops kicked in the door. They took everything including our cars and took my boyfriend to jail. I went to the bank to empty my account and bail him out. He was charged with felony possession and intent to sell. Fuck.

We had to get the hell out and start over. We found a house by the beach and left our old life behind. With any money he had left, he took me to Diamonds Direct and bought me a ring. Honestly, it was the most romantic thing anyone had ever done for me. He always supported me and I knew I would stay by his side through all of this mess. With my good credit and consistent stream of legal income, I got approved for a loan and we moved into a farmhouse in the middle of nowhere on 3 acres. No one would bother us there. So how would we pay our rent? We had lost so much and he was in so much debt to the government. With nothing to lose, I told him if he gave me all his time and effort, we could drastically grow my online store. Over the years, I had really built an online presence for myself, and with the help of social media, my business was small but mighty. I had everything in place from insurance policies, permits, and cashflow to succeed. I just needed more help and I couldn’t trust anyone except him.

He gave me his word that he would fulfill every order and it would give me time to grow the business. One thing led to another and we were ready to open a new store. We both wanted to start something fresh and exciting. Something that would be a mixture of both of us. It was January of 2019 TheHornyStoner.com was born. It would become a safe place to purchase sex toys and smoking products. In a world where smoking and sexuality is censored and looked down upon, it was something we highly endorsed. There was no other website like ours, and we had discovered a niche market that loyally supported our dream. Within a year our numbers grew unbelievably fast and we could finally afford to re-invest. I have to admit, with him being on probation we still looked behind our back wherever we went. He was getting drug tested so we decided to sober up together which gave us the capacity to hustle even harder. When CBD became legal we saw it as an opportunity and created our own line of products. I still couldn’t believe that this sequence of events led us here. Life has a funny sense of humor when you have hundreds of bongs and butt plugs in your spare bedroom.

With neither of us having college degrees and being covered in tattoos, our safety net is each other. There is no fall-back plan which makes us work that much harder. So as we continue to grow, we plan on hiring, scaling, and eventually moving into a warehouse. Some say that success comes from luck, but ours stemmed from our mistakes, love, and hustle.

We plan on getting married this 4/20.