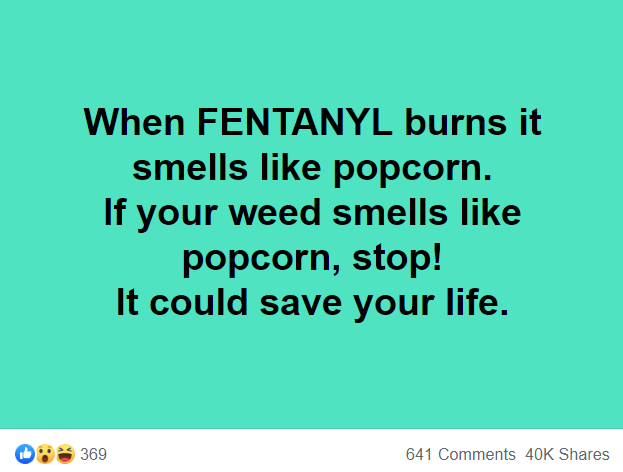 Numerous claims about how to detect drug fentanyl-laced weed appeared without citation on Facebook and it appears to be based on one single, years-old anecdote.

On April 4, 2019, the following warning appeared, containing the claim that cannabis smokers can detect fentanyl contamination by smell: 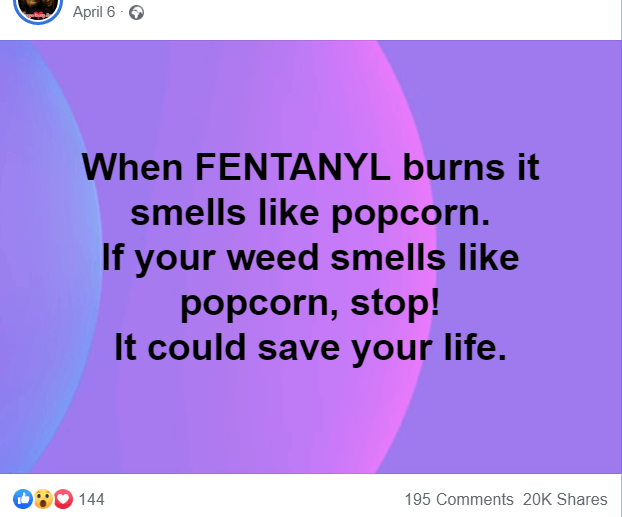 Together, both posts have more than 60,000 shares, that’s why it’s time to clear up whether this is true or not.

An assertion in the comments matched what we encountered looking for any documented instances of fentanyl-contaminated marijuana. If you check Google, you won’t be able to find a lot of information about cases where cannabis has been laced with fentanyl.

We recently reported the following incident: 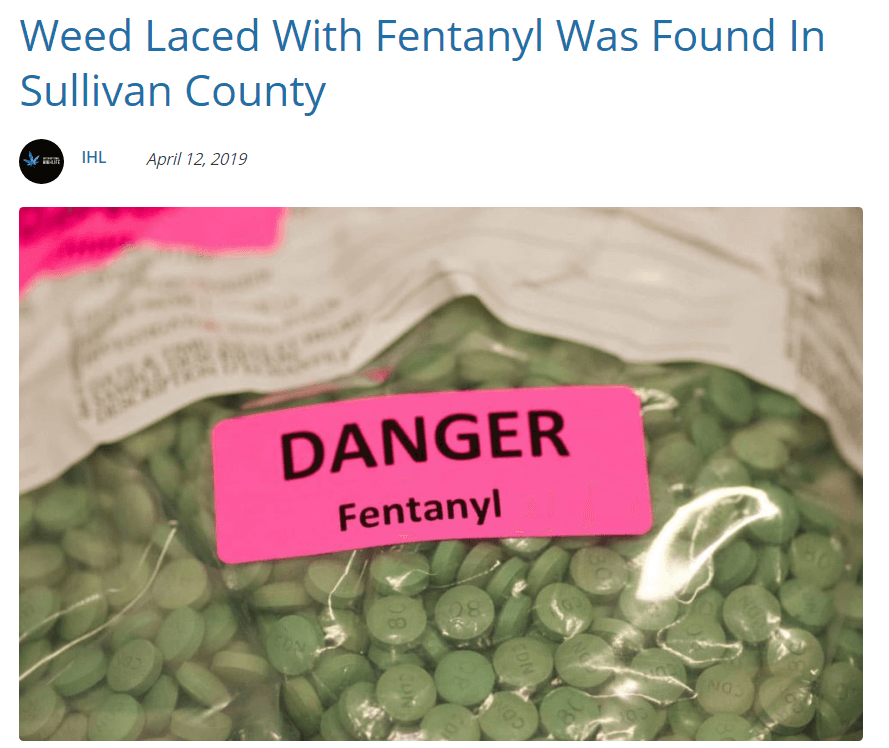 Sullivan County Sheriff Michael Schiff warned the public that cannabis laced with fentanyl has made its way to Sullivan County. We think this could very well be some kind of scare tactic by the police to keep people from consuming cannabis. Anyway, let’s get back to the Popcorn smell rumor.

… The mistaken police reports might have come from weed that tested positive for fentanyl on ultrasensitive test strips that can detect the drug at concentrations as low as one-billionth of a gram. Weed handled by dealers and people who might use all sorts of drugs will likely have trace amounts of fentanyl, similar to the way that studies have found US currency widely contaminated by cocaine. “The positive samples are from levels of contamination that are not clinically meaningful,” Ciccarone said. “They are not felt by the person.”

The other evidence of cross contamination comes from toxicology tests on people who died of an overdose. That isn’t a sign of drug dealers purposefully adding fentanyl to marijuana, but rather that many drug users take all kinds of drugs.

“The smoking gun,” [epidemiologist Dan] Ciccarone said, would be a positive test of a marijuana sample that contained micrograms to milligrams of fentanyl. (As little as two milligrams can be a lethal dose of fentanyl, according to the DEA.) No such record appears in the scientific literature.

A search of NIDA’s archives did not return any results for incidents of fentanyl-laced weed. Broader searches for incidents in which marijuana was tainted with fentanyl led back to reiterations that no such contamination had ever been verified, along with reports that explicitly described reported incidents as “rumored.” In one instance, Narcan was administered to a student solely because of a rumor about fentanyl-laced marijuana:

The incident is still under investigation. It is unclear what, if anything else was in the oil-based THC and it has been sent to a laboratory for testing[.]

Information about the purported olfactory properties of fentanyl largely claimed it has no discernible odor or taste, or, alternatively, that it has a faint “powdery” scent. The latter claim was anecdotal, as was a description in a February 2017 article mentioning “popcorn” — the possible source of this particular rumor:

In 2015, local police had 12 seizures of fentanyl. In 2016, it climbed to 69, with an additional 15 drug seizures sent to the Centre for Forensic Sciences in Toronto to determine the substances was, or contained, deadly fentanyl.

Most of the seizures were in powder form, says Det. Ian Young. On the street, it’s known as china white or popcorn heroin because when fentanyl is smoked it smells like burnt popcorn, says Young, who recently spoke at a conference on opioids.

That article was about fentanyl alone, not marijuana-laced fentanyl, and it was based on an anecdote from one police detective in Canada who said that fentanyl itself, not laced marijuana, smelled like popcorn when smoked. But the larger share of information about fentanyl indicated that it is primarily odorless and tasteless.

Although cross-contamination of fentanyl has been reported in cocaine, the manner in which it occurred did not logically carry over to supply chains of illegal marijuana (which is not powder based):

“Nobody wants to kill off their customer. Nobody’s trying to put fentanyl in their shit to get their coke customers [to switch] over to heroin when their business is coke,” [Tino Fuentes, a harm reduction and overdose reversal specialist] says, especially since there’s a chance that combination could kill them. The more likely culprit, he continues, is accidental cross-contamination.

It goes like this: Dealers rush the cleanup, sloppily wiping down the area with a rag, which means traces of fentanyl remain. Then they begin to cut and package another product — in this case, cocaine — on the same table, with the same tools.

Multiple 2018 news articles reported that no one had unearthed a single case of fentanyl-laced marijuana, and we were unable to find any subsequent incidents of said contamination.

So if fentanyl-laced pot isn’t actually a thing, where did these rumors origin from? Well, when it comes to the “misinformation” that continues to be spread by the White House – using the data collected by NIDA — all of it is based on anecdotal evidence from local police departments. But all of those reports were eventually proven to be false. Even the fact-checking site Snopes found no evidence to suggest that this drug combination is not a legitimate concern.

Additionally, nearly all information about fentanyl’s scent indicated it was odorless or faintly powder-scented, not that it smells “like popcorn.” The inherent risk in such information being spread as “better safe than sorry” was lulling recreational drug users into a dangerously false sense of security with respect to detecting contamination from drugs such as fentanyl.

Long story short, this is clearly a rumor.