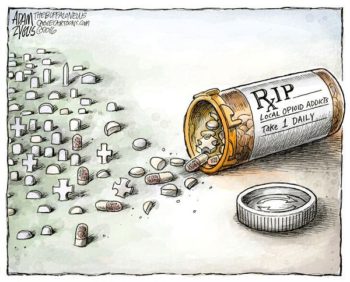 CANNABIS CULTURE – Cannabis Access is key to fight opioid crisis.
As opioid addiction and death increases nationwide, Canadian compassion clubs and dispensaries prioritize the needs of patients and push back against Health Canada’s bully tactics.
From 2016-2000, over 19,000 Canadians lost their lives due to opioid-related causes, with nearly 2000 of those in Vancouver alone, and those numbers do not look to be improving any time soon.  According to the Government of Canada, “The COVID-19 outbreak is worsening the already deadly and ongoing public health crisis of opioid overdoses and death.”
Victims of the opioid epidemic.

April of 2021 set a new benchmark for opioid deaths in British Columbia with an average of 5.9 overdose deaths per day in the province. While May numbers have yet to be confirmed – all signs point to breaking that record.
It would therefore seem logical that Health Canada and provincial leaders would be in full support of low-cost cannabis as a tool that has proven effective in curbing opioid use.  However, the opposite seems to be the case as more and more compassion clubs are being targeted by raids and shutdowns.
Neil Magnuson is the founder of the Cannabis Substitution Project (CSP), currently the CSP operates out of an RV because their storefront was raided by law enforcement.  The CSP works with the Vancouver Area Network of Drug Users (VANDU), a non-profit organization and advocacy group, to dispense unregulated cannabis flower and edibles to marginalized people who could not otherwise get access, either because of cost or other barriers.
Magnuson (centre) and the volunteer CSP staff. Photo taken inside their storefront before police raided the facility and pressured the landlord into eviction.

“High-dose edibles are able to get people through withdrawal and replace the use of opioids,” said Magnuson in an interview with Cannabis Culture.  “Very poor people can’t access through the government stores, and they are the real ones that need it.”
“We have 250 people in a program where we give them 420 milligrams every four days for free, and the doctors who have written us letters state very clearly that those people, if we stop doing what we’re doing, are going to be put at risk of death,” says Magnuson.
When Vancouver decided to regulate the unlicensed dispensaries and remove the availability of high-dose edibles, Magnuson went to city council and proposed a project through VANDU where they would give cannabis away to make access as easy as possible.  Despite not being able to get city approval, the Vancouver Police Board was made aware of the plan and gave unanimous support.
Contents of a CSP carepackage

Thanks to generous donors and the dedication of the CSP, the program was such a success that hundreds of people line up weekly to receive their care packages of edibles and flower.  It took years (and thousands of overdose deaths), but the City of Vancouver finally passed a motion saying that they would support low-barrier access.
Back then, Neil along with members of VANDU and the Green Cross began the hunt for a location, being open about their intent to sell outside of the Cannabis Act.  After about a year, they found a landlord who believed in their cause and set up the Healing Wave.
Only 2 weeks after opening — City Licensing showed up and told them they had to stop.
The same city licensing officials sent a letter to the landlord telling him to stop renting to them or he would face prosecution.  The VPD raided the store in an attempt to shut them down, but Magnuson immediately moved the venture to an RV and was able to avoid missing a day of service to those he vowed to help.
CSP Street team providing the community with relief

For the last several years now, the CSP have been fighting for their rights to operate, including requests to adjourn eviction until licensing is in place, a comprehensive application to Health Canada, and an emergency request to the Federal Health Minister for temporary exemptions to continue dispensing in the interim.
After constant delays, Magnuson had a conference call with Health Canada official John Conroy, who expressed apologies for taking so long, but said that their request was difficult to approve because of concerns that others across Canada might want the same access.  “Of course, I said that would be a good thing,” says Magnuson.
So why the concern?
Magnuson believes it is all about money.
“It’s all about hurting the bottom line, profits of their government stores.  The segmentation of cannabis users is completely real, and it’s added to because of so-called legalization, ” he says. “They got to take over the money side of what we had going on here as activists and growers and med users.”
B.C. Public Safety Minister Mike Farnworth and Attorney General David Eby attend opening of the first government-run B.C. Cannabis Store, Kamloops, Oct. 19, 2018. (B.C. government)

Cannabis Culture reached out to Health Canada to ask why operations are actively being targeted for shutdown, or having their applications for operation significantly delayed, when offering low-income individuals high-dose edibles to reduce their likelihood of returning to street drugs is cheaper than government-licensed cannabis and will save lives.
Health Canada’s response:
All cannabis sold within the legal, regulated supply chain is subject to strict quality standards to protect consumers.  Illicit cannabis that is produced outside of the regulatory framework established by the Cannabis Act is not subject to any quality or testing requirements and may present significant added risks to consumers.  Consumers of illegally produced cannabis products were reminded of the dangers that unregulated products can pose to their health and safety with the emergence of cases of vaping-associated lung illnesses in the United States and Canada in 2019.
Flower cannabis is not chemical vape liquid. Health Canada’s statement misses the mark.
False equivalency aside, What Health Canada failed to include in their statement, however, is that groups like CSP acknowledge the way they are operating is likely to not be approved.  This is why they are requesting licenses for all of their current suppliers, as well as already working closely in some locations with licensed suppliers such as Twisted Extracts.
The CSP is not alone in their battle.  Compassion clubs across Canada are submitting applications to Health Canada trying to provide low-barrier access and get approval for their trusted suppliers.
Ted Smith, Founder of the Victoria Cannabis Buyer’s club

“We value lives over profits”
Ted Smith, founder of the Vancouver Cannabis Buyers Club (VCBC), told Cannabis Culture that he believes he has been raided more than any other compassion club.  The VCBC really came into the spotlight during the notorious “cookie case,” where an employee was eventually acquitted on all charges related to creating low-cost edibles.  Unfortunately, that win, like many others in Canada, has not led to any legislative change as of yet.
“We value lives over profits,” said Smith.  “We need to force Health Canada and our federal government to acknowledge that cannabis is not the dangerous drug that they are treating it to be.  They need to acknowledge and embrace the use of cannabis as medicine, and there could be no better point in time to do that than the opioid crisis.”
Smith added, “So many patients of lower income in particular, who are typically the ones dying of this opioid crisis, need to be given better options than what’s legally available, and that would dramatically reduce the problems that we’re seeing from opioid use in our medical system, and cannabis is the best tool in the toolbox to fight the opioid crisis.”

Canadian activists will never give up, vowing that for every person arrested, 10 more will be there to replace them.  They will continue to save countless lives while battling Health Canada and the federal government in courts and on the streets, working toward the ultimate goal of true legalization and low-barrier access.