You’ve probably been there before; You’re enjoying your holidays, and it’s clear that you don’t want to go to bed without smoking something.

The problem is, whether you consume joint, a bong or a pipe you’ll produce an intense smell, especially if you’re having good quality cannabis. That’s precisely why you have to be careful because the hotel can charge your credit card (fines are usually between $200 – $300) if you violate their non-smoking rule.

Back in the days, it was common that guests were routinely asked whether they would prefer a smoking room or not. But today the number of hotels offering smoking rooms is vanishingly small, especially in the United States. There are still some hotels that offer smoking rooms in Europe though (even good ones).

According to the American Hotel and Lodging Association, the share of hotel rooms that are non-smoking has steadily risen from 74 percent to 97 percent over the past ten years. The proportion of hotels that only offer non-smoking rooms has jumped from 38 percent in 2008 to 85 percent since then.

What many of us don’t know is that the cleaning crew is not just sniffing for evidence but looking for it in the trash receptacles and they are smart enough to look for more than the very typical signs of pot smoking.

There are a few techniques and devices used to promote the illusion of a smoke-free environment that might help in this situation. And at least three of these can be used if you have a strict landlord or are living with the parents.

Does The Towel Trick Really Work?

Be careful with the towel trick because every hotel employee knows about this. The wet towel won’t eliminate all the smell, but if you ask me, it’s better than nothing 😉 One thing though, when staff puts your fine under the door, and it’s blocked by a towel, they already know what’s up.

Eliminate All The Evidence

Make sure not to leave behind any butts, ash, papers, filters or any other smoking material whatever. It’s best if you have something like a Tupperware where you can put all your stuff in.

When comedian Doug Benson saw that some hotels were using the AirGuard device to detect anyone smoking tobacco or weed in their hotel room, he declared a boycott on those hotels. To keep toking without the expense, he uses a Smokebuddy to filter the air he exhales into it. You can get one here.

Make a sploof—the poor man’s Smokebuddy—with a plastic bottle, dryer sheets, and scissors. Rinse the bottle out, puncture the base several times and stuff it with dryer sheets until full but not packed. Poke a hole into the cap and add a final dryer sheet under the cap as you screw it back on. Exhale your weed-filled lungs into the bottle and turn skunky smoke into Mountain Fresh Linen Breeze.

Do not throw this out in your trash can in case it reeks or the cleaning crew cotton on to what it is. 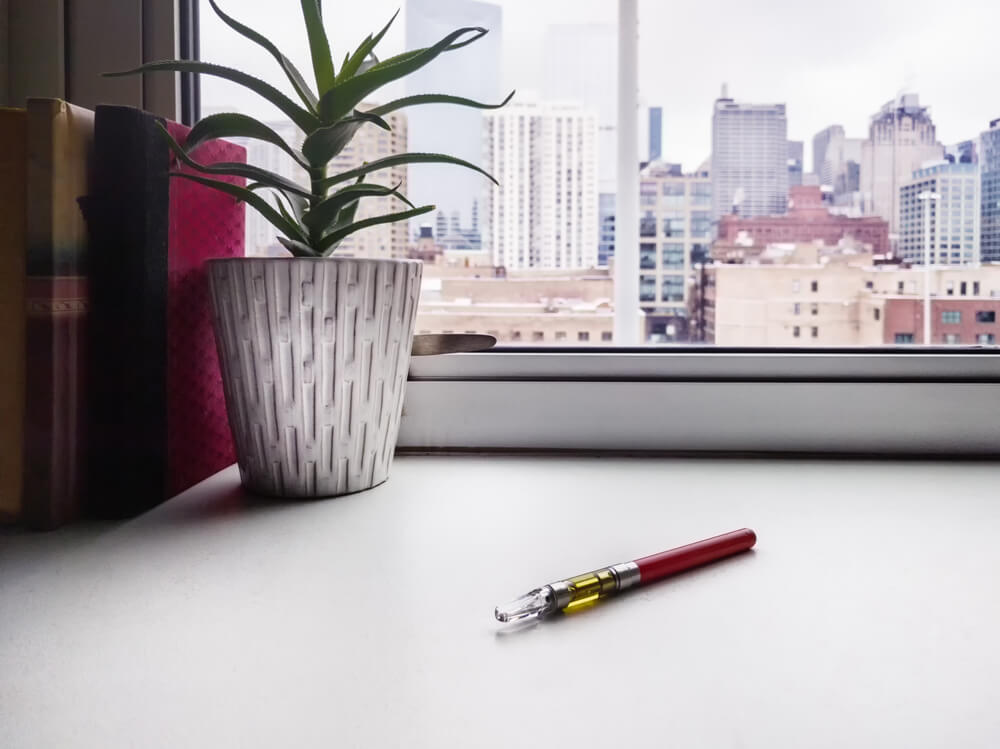 Joints and blunts leave behind the most offensive and detectable odor. Use a vaporizer or a vape pen to produce less smell.

Smoke By The Window

We know that this won’t solve all your problems but if we are on the road with the crew we just sit by the window and exhale through the windows. Preferrably, you should use a pipe or bong instead of a joint because you will need less hits and therefore produce less smell.

If you combine this method with the towel trick you should have a decent chance to get away with it.

If there are no windows, close the bathroom door and run the shower as hot as possible until the room is very steamy.

Once your bathroom is sufficiently steamy, spark up and enjoy. The steam will knock down smoke and absorb the smell.

Throw some of the hotel shampoos in there too, and soon your room will smell like a flowery bath, and you can relax without the paranoia of someone interrupting your high time.

Take Care Of The Cleaning Crew

Last but not least, make sure to tip the cleaning crew daily and be super nice to them (you should be nice anyway ;)). Also, make sure not to leave a mess behind if you’re out of the room.

Did we miss anything? Let us know how you beat a penalty in the past!