Old School High: What Does the Bible Say About Weed?

Old School High: What Does the Bible Say About Weed? 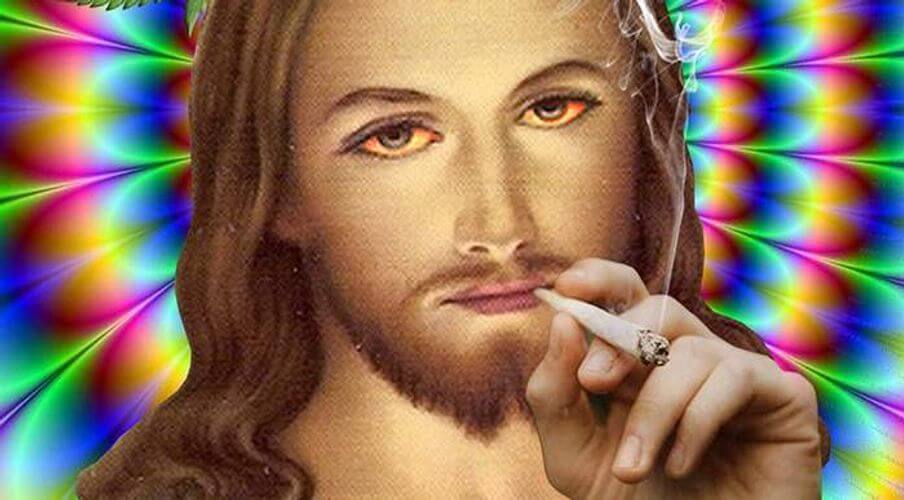 But with all that, what does the Bible actually say about cannabis?

To find the answer, we have to go to the beginning. In Genesis 1:29-30, we can find God being his most benevolent, most non-genocidal:

“Then God said, “I give you every seed-bearing plant on the face of the whole earth and every tree that has fruit with seed in it. They will be yours for food. And to all the beasts of the earth and all the birds in the sky and all the creatures that move along the ground—everything that has the breath of life in it—I give every green plant for food.”

Taken literally, this verse would seem to ban sinsemilla as bereft of seeds, but “will be yours for food” seems to make it clear how the Big Guy feels about edibles, while also seemingly condoning the use of cannabis for animals.

A verse in the original Hebrew that linguists and cannabis fans come back to often is found in Exodus 30:23, which describes a number of holy anointing oils, including one referred to as kanei bosem. This sounds an awful lot like cannabis, and translated literally it includes the words kanei for reed, and bosem, meaning “fragrant” and in modern Hebrew, “perfume.”

In the passage, God, who had previously spoken to Moses in the form of a burning bush, (very subtle) gives his prophet instructions on how to create the holy oils for anointing the Hebrews’ tabernacle and in a subsequent verse, the incense (ketoret) that would be used to hot box the tabernacle and the Temple in the Land of Israel.

(In Israel in 2019, 250 shekels can get you at least three grams of marijuana and potentially much more if you receive it legally as a medical cannabis recipient. The Book of Exodus gives no indication of the buying power of the shekel at the time.)

Was everyone high back then?

In a 2012 interview with the Jewish Telegraphic Agency, Yoseph Needelman, author of Channabis Chassidis, a historical look at Jews and marijuana, stated that 11th-century Jewish sage Rashi called kanei bosem “important” and that legendary medieval Jewish scholar (“and a doctor!” as his mother would surely point out) Maimonides called it “universally valued, in every country, and every empire.”

In a 2013 interview with the Jewish Daily Forward, Boston geriatrician Yosef Glassman spoke at length about his research into the history of Cannabis in ancient Judaism, and how it is mentioned both in the Old Testament and in the subsequent works of rabbinic commentary that serve as the backbone of much of Jewish observance, including the Talmud and the Shulchan Aruch. These include a mention of how Aaron the High Priest (aren’t we all?) likely burned cannabis as an offering “during a time of turmoil” (been there).

The question that inevitably is raised when looking at these passages is: were these guys high all the time? Is that why Aaron saw his half-brother split the Red Sea? Is that why they wandered in the desert for 40 years?

If this has crossed your mind, you aren’t alone. In a 2008 article for the journal Time and Mind entitled “Biblical Entheogens: a Speculative Hypothesis,” Hebrew University Professor Benny Shannon presents a hypothesis “to which the ancient Israelite religion was associated with the use of entheogens (mind-altering plants used in sacramental contexts). The hypothesis is based on a new look at texts of the Old Testament pertaining to the life of Moses.”

The work is largely based on the fact that in areas of southern Israel and Egypt’s Sinai peninsula grow two plants that contain the same psychoactive molecules found in the plants used to brew Ayahuasca — which could explain some of the weird shit going on in Egyptian hieroglyphics.

And then came the buzzkill

Now, while you may have heard how in a pinch you can roll a joint with the thin, Zig Zag-esque pages of a Gideon’s Bible, what does the New Testament actually say about Cannabis?

There are no clear passages in the New Testament in which Jesus — an unemployed, long-haired man in his late twenties — spoke for or against the use of cannabis. That said, devout Christians have tended to group cannabis in with other forbidden substances, such as alcohol.

“The scripture speaks against drunkenness, and marijuana is a mind-altering substance with the purpose of achieving, essentially, what the Bible would describe as drunkenness,” Russell Moore, president of the Ethics & Religious Liberty Commission of the Southern Baptist Convention, told Buzzfeed in 2017.

Others point to passages in the New Testament like 1 Peter 5:8 which says “be sober-minded; be watchful. Your adversary the devil prowls around like a roaring lion, seeking someone to devour.”

While devout Christians may have a tendency to (publicly) denounce cannabis, some members of the flock are taking a different approach.

Pastor Craig Gross, the founder of Christian Cannabis, advocates for marijuana use for devout Christians, and credits it for helping him attain a closer relationship with God. According to Gross, the founder of XXXchurch in Pasadena, California, which works with people addicted to pornography, looking for approval for cannabis in the liturgy is besides the point.

“A lot of people just want a verse, here’s my thoughts on that — how come we live in a world where we think god stopped talking to us two thousand years ago and the story has been written,” Gross told International High Life, adding “I find it fascinating that we want to prove that it’s okay with scripture instead of looking at it as an extension of God in new ways.”

In the end, whatever meaning you extrapolate from the Bible when it comes to cannabis, it’s a bit of a moot point. The plants are here, somebody or something created them, and they aren’t going anywhere anytime soon — so we might as well enjoy their benefits and have some fun along the way.