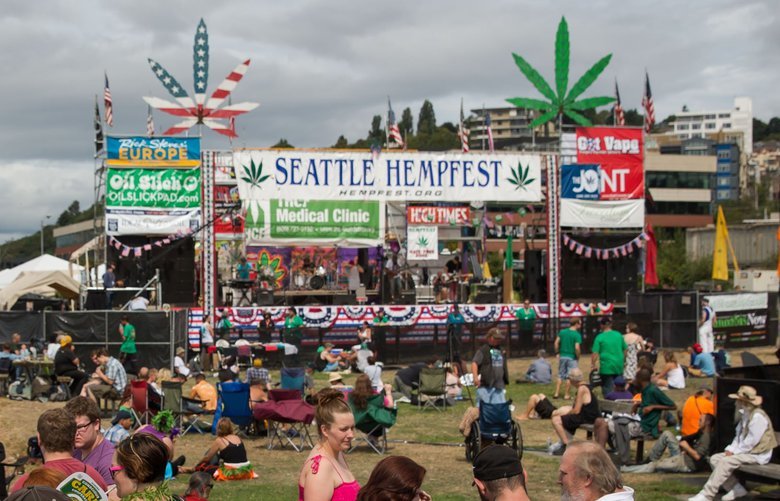 CANNABIS CULTURE – With a laser focus on political content and a deep commitment to community values, Seattle’s HEMPFEST® event has influenced regional and national public policy while being an economic generator in its community. We’ve proudly filed a lawsuit against the WSLCB as we believe the interpretation of the Washington State 502 advertising guidelines are so overreaching and restrictive as to be unconstitutional.

The WCLCB retracted in Bulletin 19-03  and concluded “In summary, educational, informational or advocacy literature and/or signs which incorporate a licensee’s business trade name at events held within 1000’ of restricted entities will not be considered advertising, so long as that signage, sponsorship, and literature is non-commercial in nature, e.g., does not involve the solicitation of business, descriptions of products sold at stores, lists of products sold, or refer to prices of products.” but we’re moving forward with our lawsuit to win both free and commercial speech rights for Washington’s growing legal cannabis industry.

Hempfest Speaks Flower to Power and Braves the Blowback

As an exciting new decade of promise approaches, historic advancements gain traction in the struggle for cannabis freedom. Years of battle and many martyrs later, prohibition’s stranglehold is waning and full decriminalization could be close. A new generation of weed enthusiasts join others who are just now returning to the plant with a sense of rediscovery after decades of non-use. Popular opinion is shifting as the public image of cannabis continues to evolve, and science reveals the truth about the ways that ganja can benefit humanity.

This shifting legal environment we are experiencing today is the result of activists in the U.S. and beyond refusing to accept the injustices that define prohibition. Against the backdrop of decades of hardscrabble advocacy, Seattle Hempfest enters its 29th year, consistently speaking flower to power.

It’s been a very long haul. Staffed by nearly 1,000 volunteers, Hempfest takes place on the Seattle waterfront and features 100,000 attendees annually. Over the course of three days every third week in August, multiple stages of speakers and musical acts are complemented by more than 300 arts, crafts, food, and informational vendors. People come from far and wide to attend “the world’s largest protestival.”

The largest annual free speech event in America, Seattle Hempfest operates a community values event that seeks to be a model for “protestivals” everywhere. There are many things that set Seattle’s flagship cannabis event apart from the others.

The Hempfest Voters Registration Crew has registered over 10,000 attendees to vote in Washington State.

As a safety-first organization, Hempfest goes the extra mile by securing extra AED heart defibrillators and staging “Stop the Bleed” kits throughout the event.

The Seattle Hempfest Safety Patrol is the event’s trained internal security team, patrolling the one and a half mile-long venue. Hempfest keeps toxic spill kits onsite, and our Ecology Crew sorts all of our refuse for compost, recycling, and landfill, averaging 500 cubic yards (or 100 small dump trucks) of refuse processed per event. Our motto is “leave no trace,” and we even comb through the event site picking up every cigarette butt.

Seattle Hempfest has a Code Adam Lost Child Protocol, detailed evacuation plans, and operates a Lost and Found operation at the event, spending up to two months post-event, working to return lost valuables to their rightful owners.

Hempfest organizers recently teamed up during the holidays with the Washington Traffic Safety Commission to promote awareness about impaired driving and the dangers of mixing substances.

In 2014, Hempfest commissioned and released an economic impact study, estimating that festival patrons spent approximately $7.1 million in King County in relation to their visits to the festival that year―making the event a regional economic generator.

Fighting on arrival, fighting for survival

After nearly 30 years, Seattle Hempfest remains a controversial, insurgent protest rally. We’ve made it fun and eventful, but any loud message against the status quo will experience resistance from various quarters and interests. The event is logistically and legally a complex endeavour, and there are elements of Jedi mind tricks and a Shamanic balancing act that goes into negotiating and navigating the choppy waters of Hempfest’s civil disobedience.

Our legal team is currently challenging draconian advertising restrictions on cannabis businesses. We are simultaneously defending in city court against unreasonable restrictions on our membership program as this current form of legalization sometimes feels a little like prohibition lite

Still, Hempfest has created long standing relationships with local and regional officials based upon mutual respect and cooperation, relationships that we greatly value. We seek to work cooperatively with public officials in an effort to flex our rights to free speech and public assembly in the most professional and responsible ways possible, without compromising our mission, message, or values.

And over the years we have come to learn that activism takes many forms. The ongoing work to normalize cannabis extends to cannabis producers, packagers, and retailers.

These “Ganjapreneurs” are economic activists taking their own unique risks―and making their own contributions to the greater push to move beyond commoditization to the day actual full global decriminalization is realized.

The new cannabis industry leaders are actualizing the next step in the process of legalization. They deserve a reasonable and equal business environment, one that requires federal banking reforms and a universal, industry-wide, regulatory framework.

You have to fight for your right to Hempfest

To get to that day the last outlaw harvest is planted―to arrive at a time when the cannabis plant is treated like the therapeutic natural substance it is rather than a dangerous narcotic―there is still a lot of heavy lifting to be done. Even as retail pot shops ring up sales in multiple states, we need to stay mindful. There are still thousands of Americans in jails and prisons over ganja. Parents in some regions are losing custody of their children. Some Americans are being convicted for acts that others are legally profiting from in another state.

As we work to toward our goal of full legalization, we may encounter a heightened degree of apathy based on a false sense of victory. The truth is, even our most significant gains to date are not secure, as long as cannabis is federally illegal.

And, while we work to fulfill this mission of reform, we need to prioritize inclusivity―guaranteeing that racial equity and gender equity components are built into the new, emerging cannabis industry model.

Communities of color have been disproportionately targeted and impacted by prohibition. It is important that management and ownership opportunities be made available in the canna-industry to help offset the atrocities of prohibition, so that these communities can enjoy the benefits of industry reforms.

Women still face the “grass-ceiling” in their own struggle for equal opportunity in the business world. In these early, formative stages of the cannabis industry, the ethos and values of the cannabis culture must be preserved and advanced.

We need to demand that the cannabis industry be a world leader in sustainable and renewable environmental practices. From issues like the massive implementation of single-use plastics in retail packaging to the carbon footprint of indoor cultivation, there are many ways that the industry needs to improve its impact and lead in environmental stewardship. We have the opportunity; let’s embrace it.

A leap of faith, a labor of love, and a call to action

In the days to come, consumers will need protection and public advocacy. Consumers will need to stay informed and be protected from inferior and substandard products, and be educated about the complexities of the endocannabinoid system—that is, how THC affects the brain and the body.

We need to demand that the needs of medical cannabis patients are addressed by the retail industry, including safe access to affordable medical-grade cannabis in the strains that patients require to manage the symptoms of their health conditions.

We need to promote responsible use while simultaneously combating the “reefer madness” messaging that stubbornly persists. There is still strong opposition to legalization. Despite the momentum that the legalization movement has achieved thus far, a backlash against it is inevitable. The day that we no longer need a response to a century of lies, questionable science, and state-sanctioned persecution remains in the distant future.

The gross distortions of reality presented by the anti-cannabis crowd as arguments against legalization distract us from the real, legitimate public health issues around cannabis use, such as impaired driving and youth use. These important issues need to be kept in context and addressed accurately.

Until reliable, accurate technology is developed to detect actual impairment in drivers on cannabis, field tests should replace unscientific per se blood-level DUI draws. Just because someone might have cannabis in their bloodstream does not automatically mean they are driving impaired, since cannabis and alcohol behave differently in the human body.

These are some of the things that Seattle Hempfest will be championing as we approach our 30th year, trumpeting a message of reform and personal responsibility.

People wishing to support Seattle Hempfest can find info on volunteering, speaking, performing, or being a vendor or sponsor at https://www.hempfest.org/.

The cannabis culture is a beautiful and non-threatening global family that has been mistreated and maligned for far too long. Our collective song of freedom is piercing the iron curtain of prohibition as the truth about the potent power of the herb spreads across the lands. We got this, and if we do not overcome, we’re coming over.