Vancouver’s Lift Expo Displays the Future of Legal Cannabusiness, and No Cannabis

Vancouver’s Lift Expo Displays the Future of Legal Cannabusiness, and No Cannabis 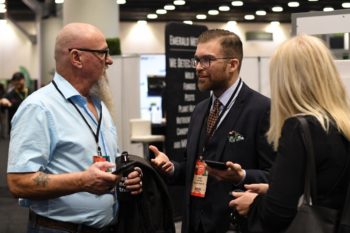 CANNABIS CULTURE – Last week, big shots, salespeople, liberty seekers and motivated entrepreneurs looking to cash in on the “green rush” converged on the basement of the Vancouver Convention Center for the cities first cannabis conference since “legalization.”

Billed as “Canada’s Meeting Place for Cannabis”, from the 10 – 13 of January the Lift & Co. Cannabis Business Conference opened its doors in downtown Vancouver.

Truth is, if you’ve been to a convention before, you’ve kind of been to them all. The well-lit stands, shuffling crowds and eager salespeople generally have the same energy.

Here, there were a couple of differences from your typical business convention. Firstly, there were noticeably less ties, though many in attendance did don their classiest attire.

A peculiar reality, especially in a post-“legalization” reality, for a convention on cannabis, there was little to of the miraculous plant on display. Perhaps I missed it, but i did not even smell the familiar pungent smoke until exiting the convention hall. This is common at cannabis conferences, cannabis is talked about, while being kept out of view.

Still, the people were there, so I got a chance to talk to all the different sorts of people populating the floor.

Of course, no convention would be complete without some industry leaders, and for those who know the cannabis industry, there were plenty of familiar faces, either speaking from a stage or mingling among the wandering crowds.

The full line-up of speakers can be found here, and it’s hard to pick one big name from the next. Top executives from Canada’s leading cannabis companies lined up to give their opinions on the future of the cannabis industry.

Perhaps in a way that was slightly different from other conventions, in that they didn’t seem holed up in media prep rooms. 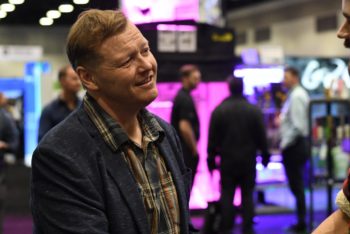 Within minutes of getting to the hall, for example, as I was looking over a poster for Toker Pokers plastered on a column, John Berfelo (a.k.a. Johnny B), who is a regular on Pot TV and has a series of cannabis businesses, sprung out of the woodworks to personally demo the device.

It’s no surprise there were a lot of salespeople at the convention. In the end, it’s a place for buyers and sellers to mingle, and even people in non-sales positions had some pitch.

The no-cannabis rule, which lots of sales people were privately baffled with, made it difficult to really interact with a lot the producers. There were lots of info-graphics and pamphlets, but you had no way of checking the quality of buds and who tried their level best to create hype around their brand.

Many of these sales people recently came from Beverages and Alcohol. The similarities in dealing with lots of different regulators translates well in the highly regulated world of legal cannabis.

“There’s so much to learn, and so much questioning that’s happening. For me, a lot of it was about how much to take in, and how much is promotion,” says Andy Gauvin, Vice President of Sales for Natura Naturals Inc, who was at Lift & Co to promote their new recreational brand, 13 Leaves (a reference to the maximum number of leaflets on a healthy cannabis plant.)

The knowledge gap might be tough to bridge at first, but the average salesperson at Lift & Co 2019 seemed eager to show off their new knowledge, and it doesn’t seem like it will cause any anxiousness for long. 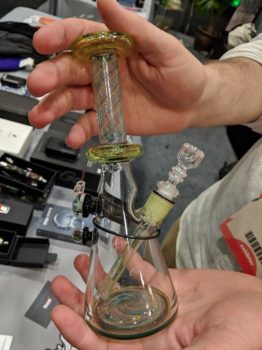 There was a lot of bustle, but nestled at the back of the convention, Verne Andru sat at an unassuming stand filled with comic book art.

Verne is the creator of Captain Cannabis, a comic strip series chronicling the adventures of puff-powered Canadian hero Halburt Lighter, who smokes some glowing joint of cosmic pot and gains powerful mental abilities.

“He’s on a mission to save earth from itself,” Verne explains.

As we get chatting, Verne pulls out a binder with documents pertinent to the history Among them is the patent for Captain Cannabis and his likeness, dated – coincidentally, it would seem – April 20th, 1977.

“You find something that correlates 420 with the cannabis culture and ill give you a free comic book” he jokes. It’s a pretty cool credit to have though.

Captain Cannabis is now celebrating its 40th anniversary. Created at a time when the word cannabis was not allowed in the title of publications, Verne was eager to walk through the changes of the Canadian cannabis scene since that time.

“Pierre Trudeau ran on a campaign to implement the recommendations of the Le Dain commission. Then Nixon got elected, and threatened to close the border if they went through with it.”

Now, 40 years later, things have changed for the better, and cannabis culture can be proudly presented on store shelves (outside of Quebec, at least).

Other exhibitors at the conference also pumped up the art. The Puff Pipe stand displayed a variety of meticulously crafted collaborative pieces from local glass-working artists, including the C26 (pictured), which came out of Roor’s yearly collaborative workshop events in Germany. The patterns are mesmerizing, and you could spend hours lost in the details, but the privilege would set you back almost 3 and a half grand.

The brand High Art also showed off their range of crafted ceramic bongs which can double as vases or decorative objects when you’re not ripping on them.

There’s a kind of person who, regardless their field, hunts primarily for opportunity. Ideas people, who have the drive and focus to turn pet projects into workable businesses.

I spoke to James Durward from MedXtractor, a company making affordable CO2 extractors for small scale grows. He decided to get into the business in 2015 when he came to Vancouver and saw the explosion in dispensaries.

“I was amazed with what I saw. […] I thought, this industry has legs; something is going on”.

Speaking to dispensary staff, he discovered that vaping was becoming popular, and realized people wanted to produce their own cannabis oil.

Even though he’s a self-described serial entrepreneur, Jim put his “technical bend” to replicating the high-end CO2 extraction methods in a small device.

“It’s the only extractor of its kind that doesn’t use a mechanical pump. It uses temperature differentials,” Jim told Cannabis Culture.

What was supposed to be a post retirement project evolved, and within a few years he was exporting to 5 different countries.

It’s been quite a journey from the day Jim created initial prototype, which used two paintball gas canisters to try and work the same effect. He’s since moved on to more sophisticated tools, but is still focused on keeping the operation of the extractors simple.

Jim’s partner-slash-customer, Al, who’s been growing for 30 years now, says he got excited about the idea of small-scale extraction and started working with Jim after making some modifications to an earlier model of the machine. Today Al seems to play the role of head evangelist for MedXtractor, which he holds is a revolutionary technology in the field, and can be seen showing off the device in testimonials on their website.

If you have a lot of weed in the house, you have to think about how to store it. Most sensible people know not to use plastic bags, but what of the more discerning consumer? What of he who takes pride in a good smoking set up?

Zane Witzel, founder of Cannador, decided to start the company because he didn’t like the idea of shoving a dry baggy into a mouldy shoebox.

Zane, who characterised himself as having OCD, likes to keep things pristine, and wanted to have a grown-up solution to keeping his rolling tray neat.

“We’re not kids in college anymore. Not that there’s anything wrong with that – I certainly enjoyed that time. But now that we have a bit more disposable income, we wanted something nicer.”

Zane decided to mimic cigar boxes and fine tune the humidity controls to fit cannabis buds. Inside, specially designed glass containers are nestled in separate slots, Not only does the box regulate the environment of the bud, but it gives your stash box that classy look.

Unfortunately, Zane also got to see an unfortunate side to conventions – people with snatchy fingers. Someone walked off with a relatively high-tech mini humidity sensor, which was definitely not free convention swag, to the frustration of the floor team.

Still, there seemed to be quite a lot of interest in the Cannador boxes, so hopefully convention sales will have outpaced the cost of the lost tech. 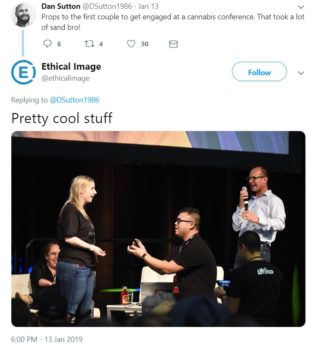 It would be an incomplete account of the whole affair if I did not mention the two couples which chose to highlight how cannabis brings passionate people together by getting engaged during the course of the conference.

Andy Le, founder of the Burnaby marketing and web design agency Cannabis Code, got down on one knee in front of the

panel series audience on Saturday and proposed to his partner of 10 years, Sabrina. This not only earned him a “yes!” from his now-fiancée, but also the distinction of being the first man on record to propose at a cannabis conference.

It was likewise an exciting weekend for the senior vice president of operations at Aurora Cannabis, Dieter MacPherson,

who also proposed to his partner, Danielle, albeit it in a more private environment.

In a way, it’s cool to see the next generation of cannabis families being created before our very eyes. If anything, that’s a pretty cool legacy for Lift & Co’s 2019 Cannabis Business Conference.