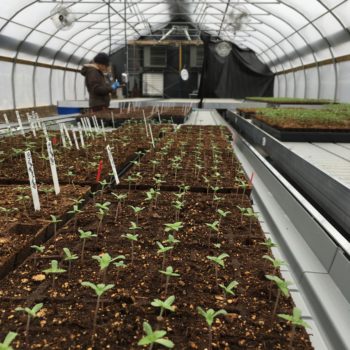 CANNABIS CULTURE – Two companies from North America’s cannabis meccas, Humboldt county and British Columbia, have announced a partnership to supply the first organic-certified seeds to Canada.
“We knew we only had one opportunity to bring in what we wanted,” says Rick Gill, CEO of British Columbia-based Nymera. According to Gill, when a company is approved for a license in Canada, on the first day they can bring in genetics from wherever they want with no questions asked. This legal gray area is sometimes called immaculate conception.
Gill went down to California to check out a few large farms and speak with Nathaniel Pennington, CEO of Humboldt Seed Company. Gill says he ended up spending a whole day with Pennington, “I think it was toward the end of the day, and just kind of out of the blue [Pennington] asked ‘would you like to grow our seeds up there?’”
“We are excited to share a piece of Humboldt’s cannabis breeding heritage with the world,” said Ben Lind, Humboldt Seed Company’s Chief Science Officer.

For a lot of cannabis companies, immaculate conception has been crucial to working in legal gray area. “It’s hard to write a law that says ‘okay, no one’s supposed to have cannabis on December 31.’ And then, on January 1, people are somehow supposed to have cannabis to grow legally,” says Pennington who sees this partnership with Nymera as another step towards solving the gray area issue.
According to Pennington, there are not many solid breeding programs to make cannabis genetics available worldwide. Usually, a person would buy seeds online from places like Amsterdam or Spain.
“If customs finds the seeds, they’re probably going to throw them in the garbage because what normal import and export of agricultural crops look like is an export certificate accompanied by a final phytosanitary certificate,” says Pennington.
Gill says Nymera is duplicating what Humboldt is doing in some areas and doing their own breeding in others to see if they can select for sun-grown strains suitable for northern climates. Nymera is in Westfold, British Columbia and has a different climate from Northern California’s Humboldt county.
According to Tyler Guerrieri, Head of Cultivation at Nymera, Westfold has about 100 frost-free days a year, which is far less than Humboldt. Guerrieri said, “The main thing we have to plan for here is to finish the last harvest before fall frost which is generally mid-September.”
To solve this problem, Nymera will be growing mostly auto-flowers. “Most photo-period strains will not finish before October at this latitude,” said Guerrieri, “So while auto-flowers produce less per acre, they do provide a much much higher likelihood of finished crop in this climate.”
With auto-flowers, Nymera will have multiple planting dates leading to multiple finish dates, allowing them to spread out the workload and complete all harvests before the frost. Gill says compared to photoperiod plants, auto-flowers yield around 60% per acre. “However, when you take the risk factor at the end of the season into account, I think it’s definitely worth it.”
“You see a lot more [auto-flower] demand in the western prairie provinces, which are a lot further north,” says Tairance Rutter, Vice President of Business Development at Alberta-based ANC. Rutter’s company will be handling distribution throughout Alberta, British Columbia, Ontario, Saskatchewan, and New Brunswick.
Rutter says that Canada is unique because in a province like Ontario, photo-period plants are compatible with the longer summers. “But places like Saskatchewan and Alberta, because they have shorter summers, I think the auto-flowers are starting to really make a comeback because of the shorter flowering time.”
Cannabis classification can be confusing, but most agree there are two main subspecies: Cannabis indica and Cannabis sativa. However, auto-flowers have unique features like their small size, shorter growing times, and skipping their vegetative phase going right into flowering, because they are crossed with a lesser-known Eurasian subspecies called Cannabis ruderalis.
The story goes, in the early 2000’s a grower named the Joint Doctor was given ruderalis seeds from a friend who crossed a Russian ruderalis and a Mexican photo-period plant. The Joint Doctor crossed this strain with Northern Lights #2 and William’s Wonder to make Lowryder, the first widely available auto-flower strain.
Rutter says auto-flowers have become more popular because they are starting to be bred with quality. “Five, six years ago an auto-flower would hit 12 inches and yield an ounce. Now you’re seeing it to a scalable size.”
Humboldt Seed Company uses traditional breeding techniques to produce auto-flower seeds. Pennington says, “We seem to be successfully cutting and pasting auto-flower traits into popular and conventional genetics within four to five generations without losing any of the original properties of the strain.”
Rutter admits he has some bias since the first seeds he grew were from Humboldt Seed Company, but he is looking forward to seeing their product spread throughout Canada. “I love that hometown feel. The true organic kind of grow is everything I stand for as a cultivator and breeder. If there’s a company that I can help support break into the Canadian market it would be Humboldt 100%.”
“[Pennington has] trusted us with his baby,” says Gill. “And we want to make sure that we do right by him and help spread the fantastic work that he’s been doing into Canada, and internationally.”