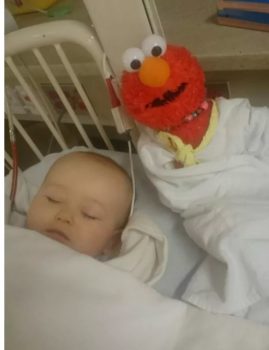 CANNABIS CULTURE – “Oh yes.. I see blastomas in there.”These were the words of our doctor, the words I did not want to hear.

My 10-month-old son, Carson, had a 10% chance of inheriting a genetic mutation that led to retinoblastoma, a.k.a. eye cancer.  My husband had noticed a tracking issue in our son’s eyes.  I took him to multiple doctors in a fight to get a referral to the Children’s Hospital in Calgary, and Dr Gallie, the leading expert in retinoblastoma research and treatment, had just confirmed the dreaded diagnosis.  Our son had cancer.

On top of that, his primary care would have to be done in Toronto.  Less than 48 hours later we landed, and shortly after that, Carson was confirmed to have a second unrelated cancer, an abdominal neuroblastoma.  We were floored.  What was to follow next was horrifying and seemed to never end – multiple cycles of systemic and intravitreal chemotherapy, cryotherapy, laser treatments, lumbar punctures, bone marrow aspirations, MRIs, ultrasounds, blood draws, blood transfusions, countless rounds of anesthesia and more.

We collected Warrior Beads at every one of Carson’s appointments to commemorate his journey and every procedure he survived, and the bead count grew exponentially.  Crossing the country by plane every 18 days, we almost always ended up in isolation as inpatients after returning home because his blood counts were low or he was running a dangerously high fever.  His hair fell out, he had a line inserted into his chest, he lost weight and the ability to eat solid food.  He did not take his first steps until he was nearly 2 years old.  Yet through it all, Carson was brave and beautiful and smiling.

As Carson’s treatment progressed, he responded well.  The tumors began to die, the incredible specialists at Sick Kids managed to save both of his eyes and most of his vision, and he was still a smiling and extremely social child.

As a parent, however, I was falling apart.  Suffering from nightmares and trauma, there were days where I could not look at him, my husband, or my older son without breaking down in tears.  I found myself sitting in a doctor’s office unable to resolve the feelings I was having and unsure how to manage my anxiety. I had always suffered from generalized anxiety that was often exacerbated by my low-level OCD. 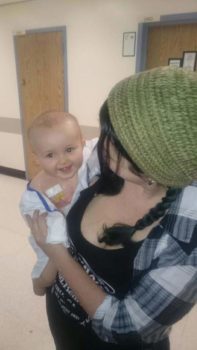 When I received a diagnosis of cancer for my infant, I felt like the world was crashing down around me.  With every trip across the country to fight for his life, I had felt more and more overwhelmed and helpless to change anything.  My depression was so severe that it became challenging for me to function, although to the outside world I seemed to have it all together. “I don’t know how you do it” – words I would often hear, but when you have a sick child, you have no choice but to put everything else aside, even when you feel dead inside.  I knew I needed help.  As I walked out of the doctor’s office with a prescription for Xanax, I felt completely defeated.  I stared at that paper for 3 days.  Then suddenly it hit me that I had not bothered to try many other forms of self care.  This was a real wake-up call.  I knew if something did not change, and fast, I would have no choice but to take this prescription that I did not want.

Having tried prescription drugs for depression in the past and not finding any success, I had to start somewhere else.

I looked into a course to work from home doing medical transcription so that I could work while my son was admitted while also learning more about the medical field in general.  I tried to find other parents who were going through the same journey as I was.  I allowed myself time to breath, take a bath, read a book, or just do nothing.  And I started smoking more weed and experimenting with edibles.

After a while, I was able to find a combination of marijuana strains and delivery methods that worked well for me.  Suddenly I could go entire days without breaking down in tears.  I could finally talk about my son’s diagnosis and treatments outside of social media updates.  I felt like life was manageable again.  Ultimately, I became a better parent and partner.  I was not groggy or feeling drugged out.  I felt an overwhelming sense of positivity, like the heavy weight I had been carrying was starting to lift, and I was able to start managing the medical, professional, and personal aspects of my life in a much healthier way.  That Xanax prescription sat in my wallet until last month, when I tore it up and threw it out.

So often we hear about the uncanny effects that cannabis, particularly CBD oil, has on medical ailments such as epilepsy, Parkinson’s, Alzheimer’s, and even cancerous tumor growth.  We have all seen the videos and cried tears of joy as we see those unable to perform basic tasks suddenly regain control of their bodily function, and small children who were experiencing dozens of debilitating seizures a day being able to find enough relief to stand, walk, play, grow.  What we do not always see are the families behind the scenes who are coping with watching those they love battle through these conditions.  Depression, anxiety, guilt, and fear are all a part of the package that often comes along with being the parent or guardian of a medically delicate warrior, and often the coping mechanisms end up being prescription drugs, therapy, alcohol, or in some cases, self destruction. 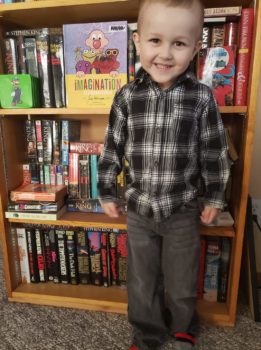 With all the proven positive effects of cannabinoids and the glorious legalization of marijuana in Canada, looking into how it could be implemented into our various community groups was a reasonable next step.  One of my communities was now the world of the Medical Parent.

One of the biggest issues that medical parents face is learning how to self care.   As soon as that diagnosis comes down, be it in utero or through the course of childhood, everything in life becomes about caring for the affected child.  You become their advocate.  This can mean countless appointments, procedures, travel, and trauma.

Helpless to change the course of your child’s condition, we had to trust the specialists, sometimes making hard decisions and almost always ending up the “bad guy” who has to hold the child down for the needle, anesthetic, etc.

When Parents finally get a minute to themselves to sit in quiet and self care, do they?

In my experience, the answer is no.  They are filling out medical forms, organizing finances, arranging child care and appointments to correspond with work schedules, anything to distract themselves from the ever-present anxiety and exhaustion and of course, their own needs.  Naturally, there is an inevitable crash.  At that point, the parent will often either burn out and sink into depression or seek help.  Sometimes this help is Xanax or Ativan, alcohol, sometimes peer groups, but more recently it seems parents are finding natural relief in the use of cannabinoids.

I decided to run a poll amongst a group of medical parents local to the Calgary area whose children are all treated at Alberta Children’s Hospital for ailments ranging from cancer to epilepsy to microcephaly, asking them whether they currently use or would consider using cannabinoids in any form in replacement of or in conjunction with prescription drugs or other coping mechanisms.  A total of 108 parents responded, and a surprisingly overwhelming 69.4% said they either would or currently do use cannabis products for this reason, with another 2.7% unsure how they feel in light of recent legalization.  I even received some comments on the poll itself:

– “My life has been completely changed by (legal cannabis use).  I can promise you I wouldn’t be on this journey still with my son and family without it.” – SR

– “I use CBD oil for myself for anxiety, and it has been amazing. I also use it for my medical kiddo for migraines and seizures, and it has helped.” – AP

– “I switched over to medical about 7 months ago now, and only take my Ativan once or twice a month.  Don’t regret it for a single moment!” – SE

– “Honestly it works better for me than any other drug I’ve been put on for depression, anxiety, and my bipolar.  I’m not sedated or a total mess.  I’m spiralling?  Give me a bowl or even just my one hitter, and I’m perfectly fine after that.  My pills don’t do that.” – AL

In absolutely no way am I promoting the rejection of pharmaceuticals.  They are often necessary, and there is absolutely no shame in having mental illness, depression, anxiety.  Many of my closest friends have been on Ativan, Xanax, Prozac, etc., for years with dramatic improvement.  Marijuana is not for everyone and has even been found to aggravate some diagnoses, such as schizophrenia.  However, with legalization we are opening doors and paving the road to a more natural way of treating ailments.  One that does not require a prescription and comes without the organ damage and other long and short- term side effects of the average pharmaceuticals.  With an endless variety of strains and potencies available in CBD and THC-dominant products, as well as the vastly different ways in which each person’s receptors respond to cannabinoids, there is now the option to explore what works best for us as individuals.  Of course, it is early and there is still quite a bit of stigma attached to ingesting marijuana in any form, especially as a parent.  That being said, the fact that nearly 70% of medical parents I surveyed were able to openly respond that they are open to cannabis use in some form gives me hope that we are quickly approaching a time where we can discuss it without fear of judgment or reproach.  Breaking down the walls and being able to openly share our positive experiences will empower others to expand their self care options as well. 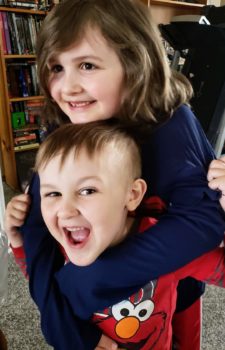 Today Carson is a thriving 5-year-old child.  He still has regular exams under anesthesia to watch for recurrent eye tumors until at least the age of 7, and will have to be monitored closely for the rest of his life as he has a higher-than-average risk for soft tissue, bone, and skin cancer.  He still struggles to eat most foods, and there is definite trauma associated with sleep and the number of times he has been put under anesthesia.  His children will have a 50% chance of inheriting his genetic condition.  But he is happy.  He loves Pokémon and Captain Underpants, playing with his brother, Lego, and taking things apart to see how they work or build them differently.  When he grows up, he wants aspires to work with Dr Gallie in helping others with their eye cancer and to be a drummer like his dad.  His favourite superhero is Miles Morales.  My favourite superhero is him.

I am a medical mom.  I am a daily marijuana user.  I am an advocate for mental and physical health, self care, my family, friends, and fellow parents.  We are creating a whole new world together, one with options, and I could not be happier to be standing at the forefront of this new era of legalization.