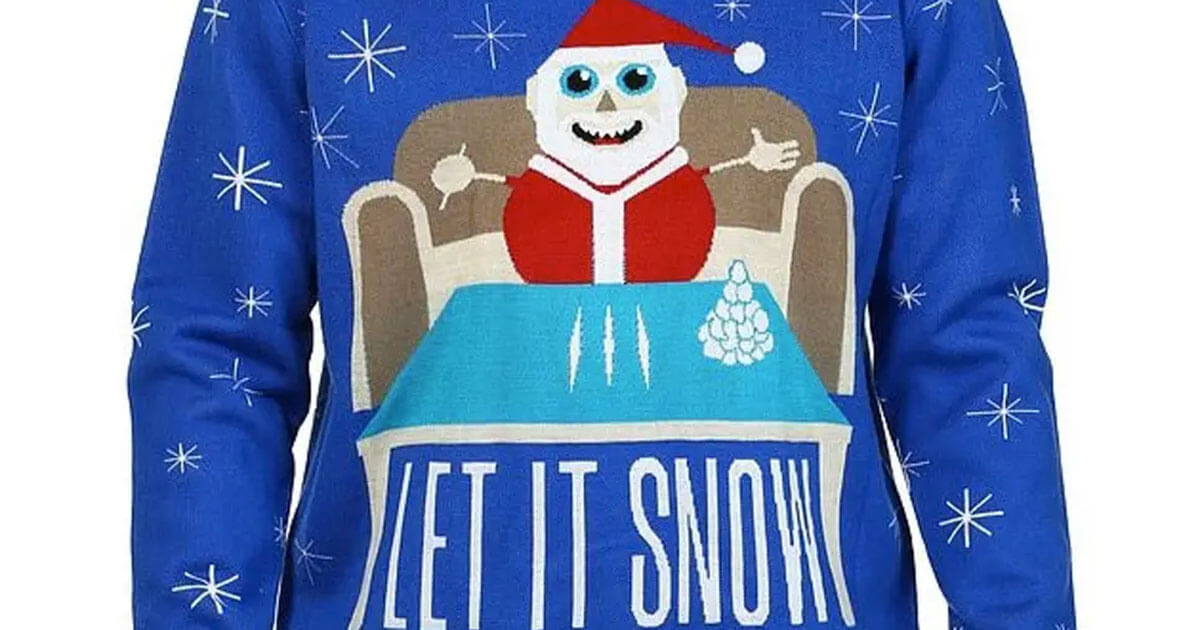 It’s the season to be jolly. Walmart Canada took that happy sentiment and punted it about 50 meters beyond the line of what’s appropriate for a family-oriented business.

As part of a line of adult-themed ugly Christmas sweaters, you could buy a blue sweater featuring a Santa (or fat snowman in a Santa costume — we have no idea which one it is), sitting high off his ass in front of a table with three lines of coke on it along with the phrase “let it snow.”

Good taste is obviously relative, and for the right kind of Christmas party, I might even consider wearing this thing. But the product description is where it gets really crazy.

Yall. Look at this description for this Christmas sweater from Walmart pic.twitter.com/lBdmKQ1JoZ

“That’s why Santa really likes to savour the moment when he gets his hands on some quality, grade A, Colombian snow. He packs it in perfect lines on his coffee table and then takes a big whiff to smell the high-quality aroma of the snow.”

And if that story isn’t dumb enough for you, Colombian officials are now threatening to sue Walmart for insulting Colombia and damaging its reputation.

The National Agency for the Legal Defense of the State wants the chain to pay for the damage caused by the sweaters (what?!) and demands that Walmart must promote legal Colombian products.

“Colombia must be respected,” the agency’s director Camilo Gómez Alzate said, according to El Tiempo. “What will the family of a person who died in the fight against drug trafficking feel when a firm like Walmart promotes a bag of cocaine from Colombia?”

Walmart has a pretty long history of pissing people off with weird products. Last year supporters of Donald Trump went crazy over a T-shirt with the words “Impeach 45” on it. Trump is the 45th president of the United States if you didn’t get that.

In 2017, the chain had to apologize for a third-party seller offering a weave cap in the color “nigger-brown” — yeah, that happened.

Umm, @Walmart we need to have a chat… pic.twitter.com/lldW0iDO55

If you’re in the market for an ugly sweater from the same line with Santa roasting his nuts (yes, his balls) over a fire, be sure to grab it because that is the only one that survived the sweater purge.

And if you decide you really must have a coked-out Santa on your chest, you can still get the original sweater here.