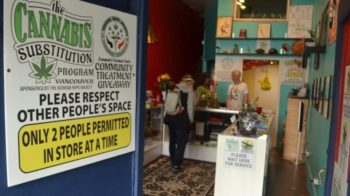 CANNABIS CULTURE – As opioid overdoses skyrocket in the province, the BC Supreme Court has ruled that a nonprofit helping more than 200 Downtown Eastside Vancouver residents with harm-reducing cannabis has to vacate the building from which it operates. A branch of the Cannabis Substitution Project (CSP) and cost-reducing nonprofit The Healing Wave both operate out of the shop at 157 Cordova Street. They have been essential to members who cannot afford the high prices set by the government for life-saving assistance.

In a July Mugglehead Magazine article, Vancouver Councillor Rebecca Bligh said, “Our overdose numbers eclipsed anything Covid-related, and it’s like we’ve become desensitized that this is just a reality. But these numbers are devastating.”

According to Neil Magnuson, who runs the CSP and The Healing Wave programs, the Cannabis Substitution Project serves “253 members [ … ] who get 420 ml of high dose edibles of their choosing every 4 days.” Additionally, The Healing Wave serves “1,750 members […with a] low barrier access dispensary [where they can]purchase a wide variety of high quality cannabinoids from flower to concentrates to edibles, topicals and even suppositories at  affordable prices.”

Jon Braithwaite of the Vancouver Area Network of Drug Users (VANDU) said that, “People aren’t getting the safe supplies they need. The government wants to jump in and say who stays open and who closes. It’s David and Goiliath.” With this battle, “The people who end up on the sidelines are the same people who always end up on the sidelines. The poor and the downtrodden.”

Fortunately, for the time being, the programs will be running out of an RV on the sidewalk in front of their current location, but the new modality presents problems of its own. Winter is coming and “There certainly are going to be some challenges with a much reduced area to work from, slinging products out the side window of the RV with limited space inside. It’s debatable how long we get away with that,” Magnuson lamented.

The lines will be longer, and serving members will be more complicated but Magnuson is determined to keep up the work he started. While he is angry about the system that he is forced to appease in order to keep saving lives, he is hopeful that this situation will result in something better for the people he serves.

“We could end up in an even better storefront,” and, “it does provide me with an even better platform and opportunity to expose the corruption and greed driving so-called legalization; and it should gain us more support.”

In the meantime, they have to pay $10 thousand in legal fees to their landlord, and there are costs involved in getting set up with an RV. Anyone looking to contribute to the cause can write letters and make phone calls to the government and media; but the organization does not currently have a bank account. Anyone looking to donate will need to make a trip to 157 E. Cordova Street in Vancouver.